For the past decade I have been scouring our block looking for new things to find. I think I’ve found most of the ‘big things’, so then I look for smaller and smaller things—hence recent blogs on tiny springtails and fungi. 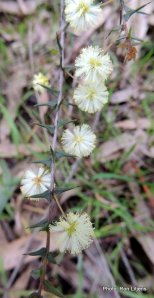 Sometimes though, nature throws up a surprise. Last week I found not one but four Ploughshare Wattles (Acacia gunnii) all huddled close together. This wattle is known in the district though is not very common. The plants were in a location that I often walk past and if they had not been flowering I would not have noticed them.

Up on the roadside another not so common wattle is also now conspicuous by its flowering. Snake Wattle (Acacia aculeatissima) is a prostrate form of wattle. Before this year, I had only known of one plant in the roadside reserve. So far this year I have located six of them. 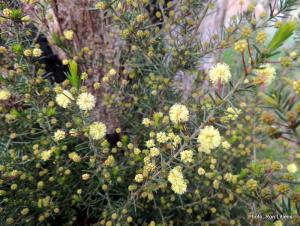 Up on our hill, both plants are prostrate bushes that seldom get higher than half a metre. They both fix nitrogen in the soil. Given the lack of soil on our property, there must be a whole lot of nitrogen looking around for a place to live.